I don’t know why it has taken me two and a half months to write Ailey’s birth story. Perhaps it is that I’ve been so busy with two little girls who own me that I haven’t had a chance to sit down and gather my thoughts? Or maybe it is because I know how emotional this post will make me … and let’s be honest, my postpartum hormones are still running wild. Whatever the reason, I’ve decided it’s time to put into words Ailey’s birth story.

On August 14th, my husband, Mom, and I stared at the phone waiting for it to ring. The doctor had told me the hospital would call to schedule my induction on Sunday (read why I was induced here). The doctor didn’t give us a time frame for the phone call, so we just stared at the phone. And waited. By the evening I was starting to panic that maybe I misunderstood the doctor and I was supposed to call the hospital to make an appointment. So I called labor and delivery myself to discover that they would be expecting me at 6:30 the next morning unless there weren’t any beds and then they’d let me know.

I would like to say I felt some pre-labor symptoms Sunday, but it was all stuff I’d been feeling for a week. Contractions here and there, a little pressure, tiny cramps, and the beloved lightening strikes between my legs. I was nervous about the whole labor and delivery, but not being induced. I have done it all before.

We spent Sunday night at Annabelle’s favorite restaurant – Kani House – because we were feeling sad that it was our last moments as a family of three. She made it easy for us to say goodbye Sunday night by throwing a horrible tantrum. Isn’t it funny how things work out?  There was no sad moment thinking it was our last as just Mommy and Annabelle.

I barely slept Sunday night because I was so excited we were finally going to meet Ailey. I woke at 4am to get ready for the hospital. I took a shower, blow-dried my hair, and triple checked my hospital bag. I would later discover I still somehow forgot a razor and body wash. Then we said “Bye” to my Mom – who thank goodness had been with us since the end of July – and drove 7 minutes to the hospital.

The Women’s Center was pretty empty upon arrival, but Brandon had to go park so I went in alone. It was so quiet and dark in the building that it felt rather cozy. We got checked in and a nurse was soon bringing us back to our room, telling me I could change into a gown and get comfy in the bed while she gathered paperwork. I love the labor and delivery rooms at my hospital because they are ginormous and look like a hotel. I unpacked my bag a bit and got cozy in bed, all by 7:30am. The nurse was back quickly with 100 different papers to sign. While we looked over the paperwork, she started my IV and hooked me up to a heartbeat and contraction monitor. Lo and behold – I was contracting on my own. It’s funny how similar it all was to the day I was induced with Annabelle. After checking me, she said I was dilated 3-4 cm and effaced 90%.

We started the Pitocin and my contractions picked up. I wasn’t in pain, but I could feel them strengthening. I became anxious thinking about the appropriate time for an epidural and texted my best friend Kim to ask for her advice. I didn’t want the contractions to suddenly become intense, so we ordered the epidural quickly. By 9:00am they began setting it all up.

I can’t lie and say I didn’t feel anything when I got the epidural – because I did. The anesthesiologist warned me I would feel pressure on my spine, but holy crap it felt like I was shot up with fire and then sat on by a 500lb man. The nurse held my hand during the epidural because poor Brandon doesn’t do well with needles. Plus, he was making me nervous pacing around the room and practicing his golf swing.

Within 30 minutes I was laying on my side and feeling wonderful. I felt a weird warm sensation between my legs around 9:40 and had Brandon find a nurse. Is this what your water breaking feels like? The nurse who checked me was not on my case and told me there was just a tiny bit of fluid and left the room. I continued feeling warm sensations between my legs, so when my real nurse came in I told her to please look and see what was going on.

She said my water absolutely broke, but there was meconium in it.

I looked at Brandon and started shaking as the nurse explained she would need to call in NICU. As she remained calm, I freaked out. Whenever there is meconium in the amniotic fluid, there is a chance the baby may have aspirated and would need medical attention. She promised 90% of the time that babies are fine when this happens and NICU would just be there for safety precautions. For the sake of my blood pressure, I calmed myself down and trusted her that it would be okay.

I never planned on watching Christmas movies during this labor as I did with Annabelle, but I packed my favorites just in case. Lying in the bed with the Pitocin drip and my epidural, I couldn’t fight back the feelings of anxiety, though, so we put on Home Alone. You would not believe how many people stopped by my room and commented on my movie choice – it was the middle of August and 90 degrees outside after all.

The next exciting moment of my labor occurred a bit after the shock of the meconium in my amniotic fluid.

I started feeling light headed, nauseous, and uneasy. I tried to tell Brandon I wasn’t feeling right, but the words wouldn’t come out of my mouth and I began to black out. Thankfully the nurse was standing there and realized my blood pressure was dropping rapidly. I also had a slight fever. She ran to get something to put in my IV and moments later I felt better. Unfortunately, this happened twice and both times was pretty scary. Brandon did his best to keep me smiling.

I continued to dilate – more quickly than I thought I would. After about 4 hours of Pitocin, my contractions were doubling in frequency but not lasting long enough. The nurse said my body was confused and contracting on its own. They had to turn up the Pitocin and then scale back a few times to try and regulate my contractions. There was no rhyme or reason to the way my body was responding to the Pitocin, but I was progressing the way that I should.

Ailey decided to follow right in her sister’s footsteps by getting herself ready to come out sunny side up. Since she was positioned awkwardly, I felt a lot of pressure and pain on the lower right side of my back and hip area. The nurses had me switching positions from side to side and I actually was able to lay on my belly. They wanted her to move, but she didn’t want to. They gave me another shot in the epidural line to try to help with the pain and I slept on and off for awhile. Brandon took a nap too around this point but set his alarm for the Chelsea home opener (Premier League Soccer) at 3pm. He joked that if Ailey had her Mommy’s timing, she would try to come when the game started.

Strangely enough, at 3:45pm – halftime – they decided it was time to start pushing.

I had a little bit of effacing left to go, so I did some pushing with the nurse while she stretched everything out. The nurse on duty was the same woman who I told me with Annabelle she always got her patients to deliver before she went off duty. She was determined to have Ailey born on her watch and was very intense when it came to pushing. While some women might not have liked her bedside manner, I loved this about her. She made me feel like I could do anything.

My OBGYN came in at this point to check things out and said everything looked good. I was close to 9cm but not entirely ready to have the baby. He noticed that she was turned sideways and hoped we could get her to turn before I delivered her. He also didn’t see any meconium but knew that it was in my amniotic fluid.  I was so happy Dr. E was delivering Ailey since I saw him most of my pregnancy. There was a midwife who was scheduled to deliver Ailey, but I had a thing or two to say about that. I am not a fan of the midwives at my practice – but that’s another story.

After I ‘practice’ pushed for 30 minutes with the nurse, nothing was happening the way it should after all that pushing and a fully dilated Momma. The epidural was amazing because I felt nothing but pressure down below. On the flip side, it was almost hard to try to imagine that I was actually pushing a baby down out of me since I was so numb. Nothing like my labor with Annabelle. I almost worried I wasn’t doing what I was supposed to be doing since nothing was happening.

The nurse and doctor conversed. They realized that while my contractions were powerful, they were not long enough for me to actually push the baby out. This could potentially put stress on the baby. They were also worried about Ailey being sideways, so we took a break with me laying on my belly. They turned the Pitocin off at this point since I was contracting so strongly. They worried too much Pitocin would be harmful for the baby and me.

After resting for awhile, I began to feel a lot of pressure on my bottom. The nurse checked me and said it was time to actively push. Brandon grabbed a leg and she grabbed my other leg. She said if I could not deliver the baby at this point then we could have some problems – if I spent too long pushing the baby when she was so low in my birth canal, it would cause her heart rate to go up too high. So, if I did not deliver the baby soon, they would have to medically stop my labor.

There was no way I would stop my labor after 7 1/2 hours.

I told them we were going to have the baby now. 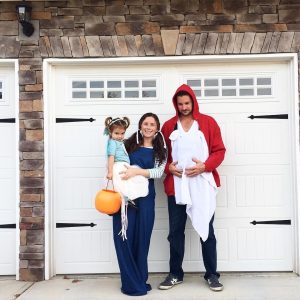 Halloween 2016 || First Halloween as a Family of Four