On my way to work I realized I felt strange and stopped at the store to buy a test. I waited until my pregnant best friend arrived at school to take the test. I laughed while I peed on the stick as I struggled to squat over the tiny toilets in her Kindergarten classroom bathroom. We stared at the test anxiously waiting for results to appear.

I took six tests before I was confident in the result that I saw. The positive plus sign was always very faint. My best friend and I even took a test apart and held the middle up to the sunlight because we were sure there were two lines instead of just one. I hinted to Brandon that I thought I could be pregnant, but I didn’t want to get our hopes up. Just two days later, after I dissected the test, I decided to call the doctor to confirm what we prayed was true.

The day before Christmas we learned I was either newly pregnant or the pregnancy would not be viable. It was too early to see a fetal pole. The doctor asked us to come back right after the New Year and he would do another ultrasound. Thankfully all was well and we saw Baby Ailey for the first time on the big screen. She was a teeny tiny speck, but there with a heart beat. My doctor’s office would not confirm my pregnancy was safe (no chance of miscarriage) for another few weeks, but I knew. I just knew within a few short weeks of conceiving that I was actually pregnant.

So how do I know that I am pregnant?

Well, some of my symptoms are textbook: nausea, swollen boobs, and excessive saliva. My body also tends to hurt like I have the flu when I am pregnant. But, the most telling sign of a pregnancy for me is the random passing out. There is usually a sudden onset of exhaustion and then I pass out – I don’t faint, I just fall asleep. Hard. And I wake up covered in drool. From that moment on, I know I am pregnant.

If I wanted to, I could hide a pregnancy from others for quite a long time. I don’t start to show for months and could blame my upset stomach on pre-existing tummy troubles. What I can’t hide is the exhaustion, avoidance of wine, and frequent trips to the bathroom. Both times I was pregnant my Mom suspected before I even told her. She has some great pregnancy sense I tell ya.

Since I am terrible at lying to my loved ones, we’ve told our families pretty quickly that we were going to have a baby. For everyone else, we waited until the recommended 12-16 weeks. It was always hard to hide the fact that I was pregnant, but totally worth it for everyone’s reactions and knowing the baby was healthy. 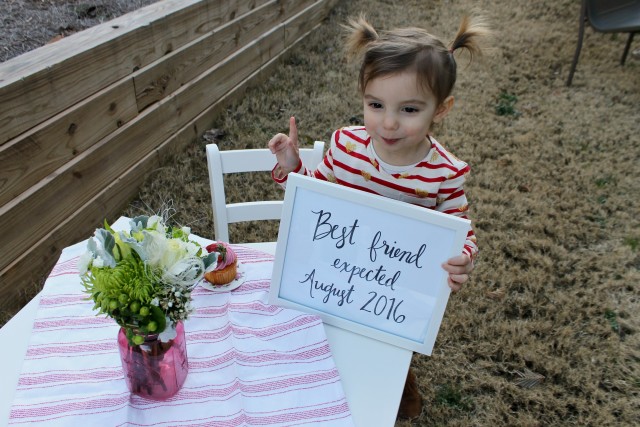 Who knows if we will have a third. Some days I totally think I want another baby, but others I wonder if we are all set with two. What do I know is that I will probably have a feeling I’m pregnant before I see the plus sign on the test.