This post about the Boston Marathon Bombing has been updated over the years as I’ve remembered details and wanted to share more. What was not included is that I was 7 weeks pregnant with my first daughter, Annabelle.

As many of you know, yesterday morning I headed to Boston to watch my best friend, Melissa, run in the Boston Marathon. When we arrived, her boyfriend, Andrew had a big grin on his face as he gave me a hug. As he whispered, “I have a little secret…” 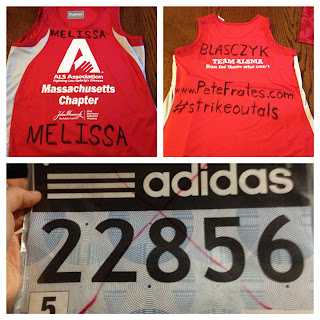 I instantly I knew he was going to propose.

Can you see the excitement on my face? 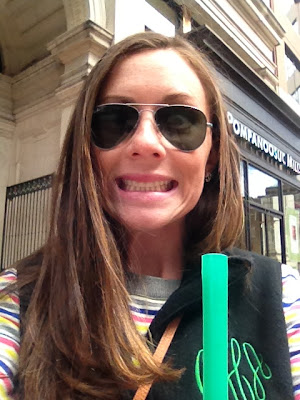 Melissa always told me her dream proposal would happen as she crossed the finish line of a big race. She imagined her boyfriend surprising her with the big question every girl wants to hear and a shiny ring. The first time she shared her marathon finish line engagement hopes was over a year ago – had no idea she would ever even run the Boston Marathon when she told me this. But now, on this incredible day, her dream would come true. 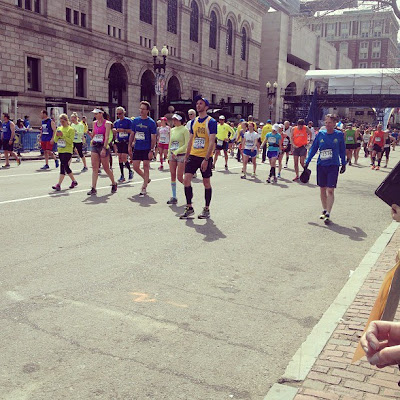 Andrew had everything planned for a perfect proposal.

He scored the necessary credentials to be don a volunteer jacket and work at the Gatorade tent. He also was in touch with The Boston Herald and a news crew – this proposal would be a big deal! The media wanted to interview him before the Big Question and then video tape him proposing to Melissa at the finish line. After he met with the press, he told us we would be able to stand on the corner of Boylston and Dartmouth, less than 100 yards from the finish line, so the news crew could film a clear shot of Melissa as she finished the 26.2 mile race. Melissa’s parents, Andrew’s parents, my mom, and I were so excited we could not contain ourselves. The mothers of the groom and bride and I kept tearing up as we anticipated her arrival. 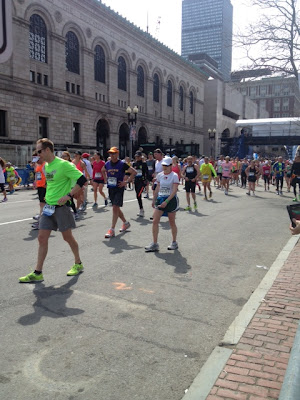 We had front row seats in the area where the runners were congratulated by announcers on a lifeguard stand as they walked towards the recovery area. Andrew was miked by a local news station and The Boston Herald decided to set up a camera on the proposal spot. We tracked Melissa’s run on the Boston Marathon webpage, so we knew when she was would be getting closer to the big moment. Then the website stopped working. I tried to refresh the site over and over again on my phone, but it was frozen on her last check-in.
I took the photo above minutes before the first explosion.
We figured there was an overflow of internet traffic, and focused our attention on the runners approaching us. We were cheering as we stared anxiously at the finish line when the first bomb went off.
The explosion was the loudest sound I have ever heard. I felt the Earth shake beneath my feet. My ears were ringing. There was smoke and lots of screaming. I prayed that my eyes were playing tricks on me – but I knew it was something serious. Without thinking I began yelling, “ITS A BOMB! ITS A BOMB!” Melissa’s parents and my mom told me to calm down, but seconds later, the second bomb went detonated. The looks on their faces, and the others around me, were of pure terror. We were all frozen with fear as people started sprinting away from the smoke.
And then, my heart stopped. Where was Melissa? I kept picturing her all alone. Happy she was almost done. No clue she was about to have her dream proposal come true.
Sirens. Screams. Crying. Wailing. People running for their lives. I can only describe what I witnessed as something out of a movie. As I started to fall to the ground, my mom caught me and hid my head in her jacket. She said there were people missing limbs that she didn’t want me to see. Andrew and his father rushed towards the chaos – screaming Melissa’s name. Melissa’s Father told us we had to get away from the area in case another bomb exploded.
I don’t know how far we walked, rushing around the city, trying to find Melissa.
The seven of us walked holding hands and only stopped to try to get cell service.
I must have called Melissa 100 times before my phone died.
I can’t imagine how my family felt seeing the breaking news and not being able to get a hold of us. All cell service was shut down for some time immediately after the incident. My husband told me he had to delete the frantic message I left him after the explosions. I was trying to tell him I was okay, but it was hard to hold it together. My sister thought my message said there were gunshots and she was frantically trying to call my mom and I. My cousin texted me minutes before it happened, saying “Your girl is almost done!” and her text wouldn’t go through. Her coworker asked if we were at the finish line, and Sam said, “Yes, why?” Her coworker told her there was a bomb that went off right on the finish line.
We received a short text from Melissa, “R u ok?” after an hour and a half since the first bomb went off.
We all started crying and embracing as we realized she was all right. We made plans to meet her at her house a few miles away.
She was only 1/2 mile from the finish line when they stopped the runners. She had no idea what was going on and just turned around to start walking. She was all alone and clueless. By the grace of God, her friends walked out of Fenway as she walked by. They told her what was happening and walked with her to a Dunkin Donuts where she got a ride home.
There were tears and hugs when we were reunited with her. Andrew was not going to let anything ruin his proposal, so minutes after she got home, he got down on one knee. 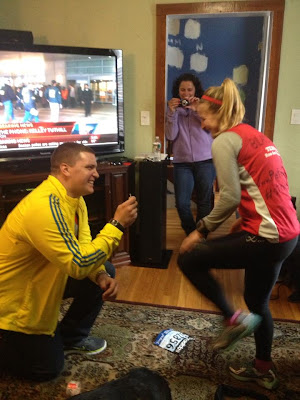 She hadn’t even taken her shoes off yet. 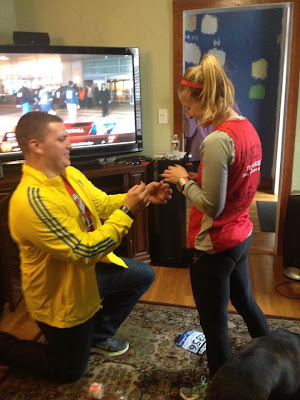 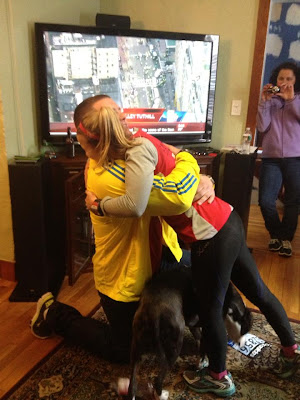 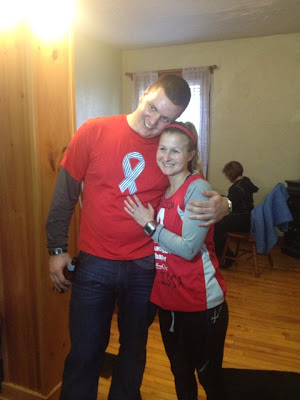 I can’t stop thanking God and the angels that were protecting all of us yesterday. Melissa had slowed her pace during the race, which kept her from being even closer to the finish line when the bombs exploded. She said that she wasn’t even feeling the race and I truly believe it was a gift from God… she slowed down and stopped to stretch a few times. I am so thankful that we weren’t standing where we had planned. I can’t stop replaying the images of the first explosion in my mind. I was up at 3:30 this morning, too afraid to close my eyes because I didn’t want to relive it anymore.
Who knows what would’ve happened if we hadn’t moved.
Amidst the horror of yesterdays events, something joyous occurred.
Congrats Mo and Rugg. I love you both. 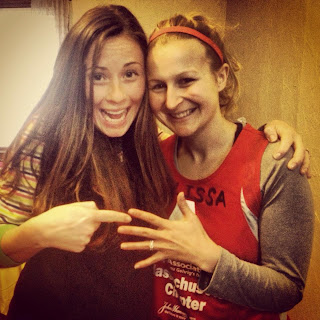 And a big THANK YOU for all of the thoughts and prayers from the bloggers who reached out to me yesterday and today. I am truly moved by your care and concern.

I LOVE MY REAL SELF ✨Today marks the one year an

I LOVE MY REAL SELF ✨Today marks the one year an