Wondering how I went about telling the family I am pregnant? Here is how my husband and I told the family we are pregnant!

I knew that whenever I got pregnant I was going to tell our families in some creative way. The day our pregnancy was confirmed by the doctor I spent hours on Pinterest and Etsy. The first to find out was going to be my parents – I would see them that weekend and I knew I couldn’t hide it from my Mom. I am known to enjoy multiple glasses of wine when I weekend in Connecticut, and if I declined a glass, she would know something was up! B couldn’t come to CT with me, so I promised to videotape their reactions….
The Etsy shop, Avecorange, has the most creative announcements I have ever seen. They can be personalized for parents, grandparents, etc. The shop owner shipped me my announcement in just two days so I would have it in time for my trip home. 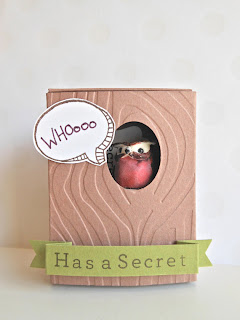 The box slides open to reveal a little owl on top of a spool. There is cloth wrapped around it that unravels like a scroll with a secret message printed on it. 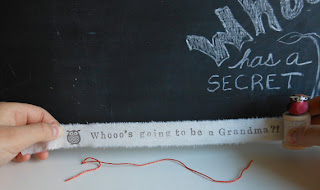 My parents already have two grandsons, but this is their first from their daughters and I knew they would not expect the news. I wanted to tell my siblings in different ways and B wanted to be present for that announcement, so I had to figure out a way to get my parents alone. For a week straight I hounded them both that I HAD to go to breakfast with them when I arrived on Saturday.
We sat down to breakfast and after the waitress took our orders I slowly pulled a box out of my bag. I told them I had a little something for them… I was visiting for their 40th wedding anniversary, so naturally they thought it was their gift. They were all smiles opening the box and I sneakily turned on my phone. Unfortunately, I was shaking so bad that I hit the record button twice and totally messed up catching their reactions on video. To sum up how they reacted: SURPRISED, ECSTATIC, OVERJOYED. My mom is probably happy I didn’t capture the moment because she was bawling like a big baby (love you Momma). 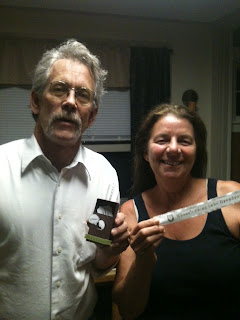 Happy Noni and Gumpy!
I told my sisters using two little gifts I picked up at a baby boutique near my house. They were coming to visit for the weekend and B and I anxiously awaited their arrival. I wanted to tell my sister, Lizzie, (by blood) first – so I called her upstairs and told her I needed to show her something. B and I shut the door on her and I gave her the gift bad. She looked inside and said, “This is nice…” and then I said, “Do you like it? Look at the message!” She looked at the message and said something like, “Oh my gosh!!!” I don’t remember word for word what happened next but she was oh so excited that she was going to be an Auntie.
Here she is with her gift (picture taken after the event): 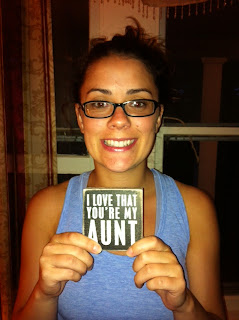 We showed her our ultrasound next and she said, “We have to tell Tine!” 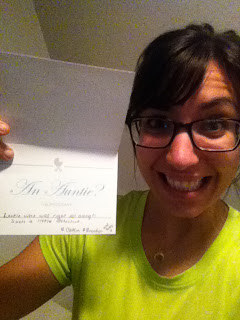 Tine actually kicked me when she opened her card!! She yelled, “I KNEW IT!” She had been hounding me the whole weekend I was home a few weeks earlier as to why I wasn’t drinking wine and I kept telling her I was sick. She said she thought I was hiding a pregnancy and she knew I was up to no good. Coincidentally, my sister in law thought the same thing. She made eyes at me the whole weekend every time I avoided the wine…
We told my brother and sister in law using our ultrasound over skype. They were SO excited and can not wait to be Auntie and Uncle to our baby H. I have yet to pick out a t-shirt for my brother… he has always said he will be the “Fun Uncle” so once we find out the baby’s sex, he will be getting himself a new “Funcle” t-shirt!
Next up was revealing the news to B’s 2 sets of parents. They are both first time grandparents and have been asking us for awhile now when they could expect grandbabies. I knew they would just explode with joy! However, telling B’s parents would be a little tricky. B would be telling his Mom and stepdad without me – since he was making the trip to Tennessee after he moved. And B’s dad was coming to MD to help us move – so we were going to get to tell him together. However, his stepmom was staying home, so we knew we would have to Skype her with the news.
I picked out a baby book and we wrote a little message inside for the grandparents to be… 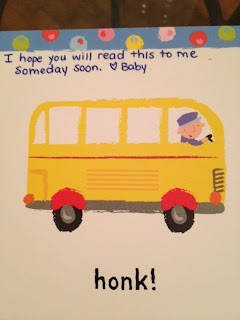 It was quite funny b/c both sets of parents didn’t immediately didn’t “get” it. B’s Mom almost thought he was joking, or just giving her a weird Mother’s Day gift. He skyped me for the moment and she was so funny, “Is this a joke?! Oh my goodness, oh my goodness!” and she fell back onto the chair she was sitting on. She was SO excited and she actually immediately sent me a Mother’s Day gift and present. I didn’t get to hear B’s stepdad’s reaction, but he said he was surprised and happy!
As for B’s Dad, once we showed him the ultrasound and he looked back at the book, he said, “No way!” and got up to give us hugs. Then we called B’s stepmom and Facetimed her with the baby book and ultrasound. She was crying and happy and just kept saying, “I am so happy, I can’t believe it!” We received this excited photo from their furbabies shortly after… 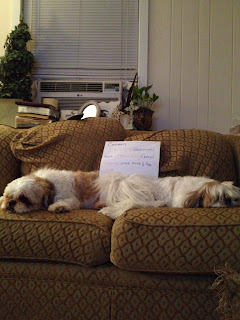 They look thrilled about the new baby, right??
I don’t have a picture of the adorable bib B’s Mom made for his brother… but it said, “Say Uncle” and she gave it to him on Mother’s Day. I know B’s brother and his future wife are so excited to be first time Aunt and Uncle!
And lastly – the Grandparents (or rather, Great Grandparents). We gave them all one of these adorable announcements from the Etsy store One Ten Stationary. 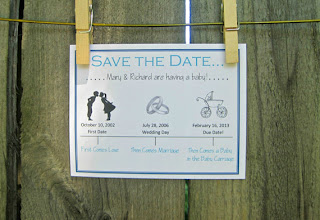 What are some ways you told your family about a new baby?!

We Are Having a Baby!