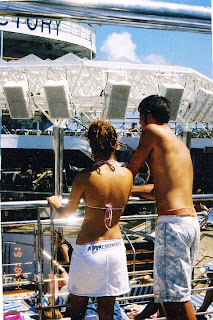 Our Story (written in 2008 – updated 2012)
In April 2003, we both went on the a Carnival cruise for our high school senior spring break. I flew into Florida from good ole Connecticut and B flew in from Tennessee. On the first night of the cruise my sister L, best friend T, and I were trying to make new friends. By trying I mean we sat at a table, sneakily drinking our spiked diet cokes, and said HEY! to every male that walked by.

I spotted a tall, cute, brown-haired guy waiting by the elevator. I ran over to find out his name. I was surprised to hear a southern accent as he said his name was B from Tennessee. Then he jumped on the elevator and disappeared. =0(

I went back to the girls to reveal the cute southern boy’s name, and my sister called ‘dibs’ on him. … even though I hunted him down… and he looked too old for her… and at that point he didn’t know she even existed. A little while later, he walked by and I introduced L and T to the new love of my life. Then he disappeared again.

The next night after a few L.I.Teas, and dancing at Carlos n Charlies, I went on a wild goose hunt for B. I had to see him again – but I couldn’t let L and T know I was breaking the #1 Girlfriend Rule: if your bff says a guy is hers, he is OFF LIMITS! Fortunately, L and T were too young to get into the Teen Disco on the ship and that is exactly where B was hiding.

Well…..we ended up talking until almost 4am, and the only reason I went to bed was because T’s Dad thought the cruise left me in Cozumel and ransacked the boat until he found me. When I woke up the next morning I knew I was in love…with Mr. Tennessee. And I couldn’t tell anyone! I thought L would kill me…which she almost did when she found out T and I were holding hands and frolicking around the cruise ship like the lovestruck teenagers we were. (Let’s just say L recorded a 10 minute video about me being a scandalous liar and that video has been destroyed.)

We spent the whole week together, flirting, fighting, talking. On the last night of the cruise we stayed up to watch our boat sail back into Miami. He snuck into my cabin and laid with me until I fell asleep. When I woke up and discovered he was gone I was hysterical…and I continued to cry until we got back to Connecticut. I thought I was never going to see him again.

After going our separate ways, we realized we missed each other way too much to call each other “friend” – but our distance was an issue and we knew we couldn’t be anything more than friends. Thank goodness for cell phones with free long distance. (And the graduation road trip B and his friends took to Boston – of course he stopped by CT!)

He was the first person I told that my parents were on the brink of a divorce, the only person I texted on my first night at Uconn, and the secret stranger I spent an hour talking to after the ball dropped on New Year’s Eve.

A year later, fate brought us back together. We were reunited on spring break once again – this time as freshmen in college and on land in Fort Lauderdale.

13 years later, we are more in love than we ever have been and thankful we found one another on that big boat.