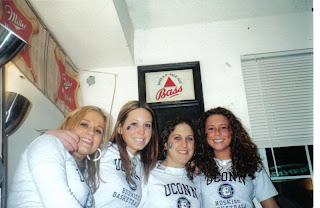 That picture was from the night that Uconn won the Nat’l Championship game in 2004 – it was quite the memorable evening (aside from my school winning a HUGE game, let’s just say a photo of me ended up on the Dean’s website and Jimmy Kimmel…).

If you are following NCAA March Madness then you know Uconn beat Mizzou yesterday and are on their way to the Final Four. Mr. H put his hateful feelings for the Huskies aside and came out with me to cheer on my team yesterday. We had a great time – not only because Uconn WON!! but also because we had some yummy cheese dip and enountered some silly Missouri fans.

One bitter fan in particular made me laugh the hardest – before Uconn had even won the game, he decided he was going to escape the restaurant before any Husky fans (mind you I was the only one in there) could give him a hard time. He put his raincoat on, pulled his hood up, put his head down, and said very loudly, “Cheaters!” when he walked by me. Cheaters, huh? I know what he was referring to, but it had absolutely NOTHING to do with the game that was being played. The guy didn’t even have the cojones to look me in the face and talk trash. The people around me even laughed at him – I mean seriously… if you are going to be a hater, grow a pair and look little ole me in the eye when you are being rude. Needless to say, I got quite the kick out of him.

What is it with bitter people? If Uconn had lost I would’ve left quietly, and not said a word to the Missouri fans crowding the restaurant. I know how to take a loss, and I take my losses in silence. I am not the kind of girl who throws stuff, punches walls, and screams curse words when my favorite sports team has a bad game. If I was that kinda chick…well that would be pretty bad. I don’t think anyone should act like that, but its worse if it is a girl.

Anyways… Uconn won, and they are going to the final four, and I am SOOOO excited for my Huskies!!!

How do you protect your skin from the sun? ☀️E

Girls Getaway ✨ Last night we snuck away to Anna

Am I normal?? - I remember asking my OB this exact

Mama - no one I’d rather be. Right here - nowher

How do you protect your skin from the sun? ☀️E

Girls Getaway ✨ Last night we snuck away to Anna

Am I normal?? - I remember asking my OB this exact

Mama - no one I’d rather be. Right here - nowher